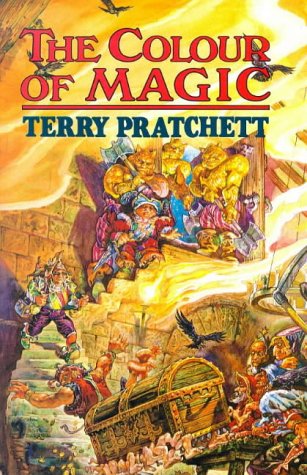 It’s not going out on a limb, or a tree branch over the Rim, to say that The Colour of Magic is Pratchett’s weakest book (at least until the late and lifeless Raising Steam).

But that’s not very interesting criticism.

There are, then, two ways of approaching the book.

The first is to position the book in Pratchett’s oeuvre.  To admit that, yes, it’s not very good, and that large parts of it are eminently skimmable, but what can one expect from a prentice work?  Pratchett is learning his craft, and to judge it by the standards of Small Gods or Jingo is unfair.

However, one can see the germs of later ideas.

From the outset, Pratchett was a parodist.  Here, he’s parodying sword and sorcery novels.  Which is all very well, but if you need to be told who (say) Fritz Leiber or Anne McCaffrey are, most of the jokes fall flat.

The trouble is that the parodies are ends in themselves, rather than being used to comment on some aspect of society or philosophy.  Similarly, there are jokes about science, economics, insurance policy and tourism, but they’re funny ideas, rather than being themes.

Speculation about the sex of the star turtle Great A’tuin, for instance, is a nod to cosmology and astrophysics (picked up further in the sequel The Light Fantastic with its jokes about the ‘Big Bang’)—but it’s striking that it’s about the world (the turtle), rather than what’s going on in that world, and making that world a mirror of ours.  As a result, the book’s inventive and (while seldom being funny) diverting and brightly told in a genre more remarkable for its po-faced portentousness than its sense of humour.  That said, one sometimes gets the feeling that Pratchett’s early books were well received for their freshness, rather than for any intrinsic quality; there’s certainly little to distinguish them from, say, a Tom Holt or a Robert Rankin.

The second approach is to do a redemptive reading, and argue that the book’s flaws are actually its strengths.  There’s no doubt that the book is badly flawed.  It’s narratively weak: a series of loosely connected short stories, with ‘types’ (wizard, bumbling tourist, barbarian, gods and demons) rather than the complex, character-driven, multi-layered plots of his maturity.  Think of it, if you will, as the Dickens of Pickwick Papers compared to the Dickens of Our Mutual Friend.  This loose construction suggests a weakness inherent in the fantasy genre itself, parodying something that is almost self-parodic.

Let’s approach it from another angle.  Pratchett, a noted atheist, doesn’t like gods—particularly gods who play games (such as Dungeons and Dragons) with mortal lives.  Which, after all, is what an author does. One could hypothesise that the Post-Modern denial of the author or authorial intention in the name of radical scepticism is a form of atheism.  Frankly, though, I’m agnostic about it.

So one could read the shaggy dog approach as deliberate: a whimsical, rambling, nigh-structureless account of man’s search for freedom in a universe with gods in.  In the face of Fate and the inevitability of Death, what makes us human is compassion (even when one is about to die anyway, and even to a frog):

Rincewind spotted a small green frog which was paddling desperately in the grip of the inexorable current.  To Twoflower’s amazement he found a paddle and carefully extended it towards the little amphibian, which scrambled onto it gratefully.  A moment later a pair of jaws broke the water and snapped impotently at the spot where it had been swimming.

The frog looked up at Rincewind from the cradle of his hands, and then bit him thoughtfully on the thumb.  Twoflower giggled.  Rincewind tucked the frog away in a pocket, and pretended he hadn’t heard.

‘All very humanitarian, but why?’ said Twoflower.  ‘It’ll all be the same in an hour.’

And, it turns out, that small act of compassion is what makes a difference.  Because Rincewind has made an ethical choice, he has free will.  Instead of the future being written for them, by necessity or predetermination or the march of history or God or any other external force, he has agency.

‘You amuse me,’ said the Lady.  ‘I have a sentimental streak.  You’d know that, if you were gamblers.  So for a little while I rode in a frog’s mind and you kindly rescued me, for, as we all know, no-one likes to see pathetic and helpless creatures swept to their death.’

In other words, Pratchett’s sitting at the feet of Jean-Paul Sartre and Samuel Beckett.